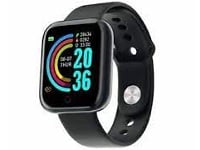 This is a Scam - Beware - They do not deliver product

July 27, 2020
Bought this item on June 9th 2020. Today, July 27th 2020 I still have not received my product. After numerous phone calls with no return to my messages and numerous emails trying to see why I have not received my order (still with no response) I have finally given up on them. I have noted other people who have been scammed as well. You should know they use Paypals logo on their website but I do not suspect that PayPal is associated with these people at all. For $50 I don't have lots of time on my hands to follow up with PayPal but just recommend people stay away from these clowns.

July 26, 2020
LIKE EVERYONE ELSE WAITED AND WAITED FINALLY SHOW UP COMPLETELY PIECE OF JUNK.
DanBendell July 27, 2020

Me too. Got Screwed that is but did not even receive anything.

July 25, 2020
I also ordered 3 watches on 6/5 and today is 7/25 and still don't have anything. Have been calling Cust Service almost every day for the last week and they have been saying don't worry you will get it tomorrow next day nothing. Got ahold of them again now they are saying 3 weeks guess I will be turning in my CC and dispute the charges .

Never got the product.

This watch doesnt exist. Its bogus bcoz I have ordered this watch for $49 but then I was charged for $82 including shipping but the worst part is that its been 5 weeks but I have not receive the watch. I have emailed them twice but no response..They even boasted that they have an award winning customer service..its a scam.

July 22, 2020
I bought the watch and they took the money out of my account a month ago, I have only received notices of other products but no mention of the status of my watch and no way to get a hold of them. DO not buy a watch from them. I have been scammed

Not what it's advertised to be

July 21, 2020
I've seen where some people have had trouble getting it to link to their phones. Unfortunately, there are two fitpro apps for the iphone and the instruction sheet doesn't indicate which one to use. The black one wouldn't link, the green one linked easily. But that wasn't the worst of the problems. The heart rate, blood oxygen, and blood pressure readings are totally fake. If you request a heart reading without even having the watch on your wrist, it waits a few seconds while the green LEDs flash underneath, then displays values for each. I wore a Fitbit on one wrist and the Oshen on the other and went for a run. The Fitbit displayed a heart rate in the mid 60s before the run and 160s after. The Oshen read 79 before the run and 82 after. On the plus side, using the right app, it linked easily so it works effectively as a watch. The step counter after the run was fairly close to the Fitbit. So if you're happy with a $50 pedometer and watch, you'll like it.
View all 2 Comments
Carl Jenkins August 02, 2020

What is the right app?

What is the right app?

July 14, 2020
Bought the three watch deal,they won't contact you to return them, they won't pair with your phone mines new samsung always says pairing error they are a rip off!!!!!!!!!!!!! took two months to find out what a POS they are

Thanks for the heads up! Joe Tilden

July 3, 2020
If this watch was such a must have product .It would be on the shelves of every retailer! Since its not don't put yourself in a position to get ripped

You can put me on the list of people that have been SCAMMED !!!!

I seriously did the same and just got them yesterday 7/6/2020. I have no idea how to charge them either.

Hello from Australia! You have been very lucky if you actually received the watches. Were they the regular or the Lux? Have you been able to use them yet?

Do they work. I have had mine on order since 23 May. Supposedly in transit but no movement apparent from tracking applications.

I've been scammed as well. See all the other comments on this site.

poor Customer service, no watch , no tracking or anything,

Ordered in mid May

2) began to receive other solicitations from "trendy tech)

3) a few days later, researched them - "are they scamming" most reviews and pathways in this effort indicated that it is a scam.

4) In researching, they claim a couple of different HQs in the US and they claim the watch is Japanese or Chinese, or Taiwanese - depending upon the web site you land on.

5) It appears they have bought numerous domains and have created a slick, but false narrative.

6) My credit card bill came today and they had charged for 3 watches. Normally my bill provides the vendors telephone #. Not in this case.

7) Called my CC and it is now in dispute.

8) Advice: do not buy this watch and if you have, put an immediate cancellation or dispute on it.

Wise men say, only fools rush in (E Pressley). I am thankful that children and fools are looked after!

I have been scammed - and they sell the PlayBeatz ear phones - total scam. Sent them my month months ago - I have called and emailed various times - no response. BuyOshenWatch.com is a SCAM. SCAM. SCAM

I ordered mine on 5/12/20 and did hear anything. Sent emails with no response. Finally received email that it has been shipped but tracking number did not work. Finally received watches on 7/6/2020. Did not realize that they had to be linked to my phone. No charger was included. Batteries were dead. Had to go in line to get answers. Poor instructions with no diagrams.

I also received my watch finally, dead, no charger nor instructions to attach straps or turn on. Disappointed and frustrated,

No tickee, no watchee

June 20, 2020
I ordered two watches with "extended" warranty. Received full reply, order # etc. with note about delays in shipping.etc due to corona bla, bla. 2 months later no watches. Called my credit card co. who immediately gave me a temporary refund in a dispute. Looks likely I will get full credit. Is this a scam? Has any body received a watch where all the features work accurately? How many of you are like me who patiently wait for our product well beyond a reasonable time? I was not a "Buyer Beware". Julius

BP and Blood Oxygen readings are a joke.

June 18, 2020
The main reason for buying this watch was for the Blood Pressure and Blood Oxygen sensing ability is what I was looking for. Once I received the watch (over 2 months after ordering), I finally figured out how to charge the battery and started playing with it. The Bp reading was always between 100 to 115/70 to 75. The Blood Oxygen reading has remained between 95 to 99. Using a professional grade meter my BP was 135/80, where it normally is. I don't have a BO meter, so I can't say positively that the reading on the watch is highly inaccurate, but pretty sure it is.
View all 3 Comments
TomBurkett June 22, 2020

You are one step ahead of me, I received mine today, with a mostly dead battery and still haven't figured how to charge it. Care to share?

You have to take the short part of the band off the watch. You should see two metal bands on the tab remaining on the watch. Plug this into a USB port to charge the watch.

amazing that you even received a watch!!!???

If you have $49.99 plus shipping you want to throw

away, suggest you find other ways then ordering this

Once they run your credit card that is the last you

will hear from them.

company is not a member.

Is this a scam or what?>

June 16, 2020
I ordered my watch on 6/11/2020. I have yet to receive any information on whether it was shipped or not. Or how long will I have to wait to receive this information. I guess as the old saying goes "Buyer beware" This holds true if you order from a foriegn company. Good luck with a refund.
D. L.Pouch June 22, 2020

I called the company and was told it would take 4-6 wks for shipment. Looks like you've got a little more wait.

June 12, 2020
THEY GET YOUR MONEY (I UNFORTUNATELY ORDERED 2) AND THEY DING YOUR CREDIT CARD AND YOU NEVER DO RECEIVE THE PRODUCT
LindsayWest June 14, 2020

I ordered mine the beginning of May and have yet to receive mine. I will wait until the beginning of July 2020 and if I don't receive I will have my bank refund the money from them. This is ridiculous and I should have received the watch by now.

Slowww, can't get customer service to pickup the phone

I ordered my watch almost a month ago and haven’t received any info regarding it being shipped or I can get a live human being on the phone. The funny thing, after a 15 mins wait on phone, you will hear the automated sleepy voice survey asking if " your problem was resolved or not and if you recommend the company" What a joke.

I will take that to twitter and to the BBB

Amazing that you even claim to have received it!!!????

May 31, 2020
I ordered my watch almost 3 weeks ago and haven’t received any info regarding it being shipped.
Write a Review