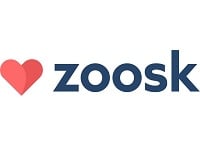 May 18, 2017
I signed up after being bombarded with messages from women I found attractive. The replies I received were basic at best. I believe many of the profiles are fake and placed on the site to attract business. Zoosk, you're wasting consumers time and making a profit unethically. Clean up your act!

Zoosk is a piece of junk

April 23, 2017
I don't know who's the disgusting person that runs this site. This animal is just after users' money. Your payment only allow you to send text. The other party can't text you back unless they have to pay too. No refund. No help telephone. It's a piece of junk and the guy running this site is scum.

I received an email today saying someone messaged me. I've done some research on this prior as well and found that it's just bots and things are outdated. So I was already skeptical, but I wanted to confirm things.

Since I wasn't subscribed to Zoosk, I wasn't able to read the message the person sent me, so I went through facebook and found the person and asked if she was still active on it.

She replied that she had already taken it off. So, that pretty much solidifies the research I've done. Zoosk is not legit.

My Letter to Kelly Steckelberg, CEO of Zoosk

I have put up with so much abuse from the men on the Zoosk dating site it is deplorable. One guy I had to block because he was blatantly asking me to go to bed with him AFTER I told him I was not interested. I have also had men get very angry when I tell them I am a progressive liberal and am not interested in dating conservative men and then calling me a liberal retard and even worse. I also have had men abruptly cancel dates when I have spent hours researching convenient places to meet and when I tell them their behavior was very rude, they have become very abusive. I have had men contact me just to tell me I am too old for them or they do not like my looks or I am too "active" implying women should not be interested in active sports when I have not even contacted them or even viewed their profile. WOMEN ABSOLUTELY HAVE A LEGAL RIGHT TO TELL THE ABOVE MEN THEIR BEHAVIOR IS VERY ABUSIVE AND INAPPROPRIATE!!!!

Then, suddenly I am no longer receiving emails from Zoosk and can not get on the site. When I call, I am told my account has been blocked AND you absolutely refuse to give me any information on why I have been blocked. I demand not only a full refund from Zoosk but also $10,000 for being subjected to both the abuse of men on your site and abuse from Zoosk.

YOUR SITE IS NOTHING BUT A SITE ENABLING RAPE CULTURE AND VERY SEXIST, EGOTISTICAL, PATRIARCHAL MEN!!!I STRONGLY SUSPECT SOME OF THESE EXTREME MALE CHAUVINISTS PIGS HAVE COMPLAINED ABOUT ME WHEN I SET LIMITS ON THEIR CREEPY BEHAVIOR AND OF COURSE, BEING A SEXIST ORGANIZATION, YOU JUST MINDLESSLY SIDED WITH THE MEN.

I am forwarding this email to media outlets and to the Ultra Violet, a feminist organization.

Zoosk and the men you promote are sick, sick, sick.

That's something I cannt get a woman on just to talk,and iam a good guy .I could wink at one at 1am and some how they answer me right away in 3 min s so and so sent you a message and you have to pay to read the message ..I did one time and the woman was gone ..this woman needs to contact good men .I respect a woman if she wants to do sports go for it. there are good and bad ,if she wink at me I would treat her like she was the most beautiful woman no matter what she looks like ,just be friends

November 2, 2016
I am gratefull to zoosk to help me to find someone very imprtant to me.

It is so good this and I aprecciate to much

You constantly get young girls from out of state scamming you. Their software can't pick your settings for race, or age, and radius you'll date. When they make your daily pick for you, it's some gorgeous woman from 300 miles away, or a local girl no one would date. The navigation sucks. You select women when you don't even know where they live. This is a really poor/scam dating site.

I was Zoosked. SOOOooo many "local" people viewing over and over and over again. Why would people view your profile dozens of times - even in a single day and not respond to a hello. When there was a response it was a quick question and then gone...followed by view after view. It quickly became predictable. The new effect? Of the several people I was able to get to respond with whom I related this exact information...in the last hour or so the 90 plus rotating views have stopped! It went from 20 views an hour to 0! How is this not illegal?

June 22, 2015
I totally recommend Zoosk . I met a few losers ... but persevered and finally met someone worth the wait! We are at a stage whre we will see where it goes ...but I am very optimistic! Thank-you ZOOSK!

June 20, 2015
Profiles of attractive women are fake. The upsell is endless. A COMPLETE disaster for a 'dating site'.

June 19, 2015
Slow at first, took a little time to get comfortable then took off like a storm!!

I have found my Prince!!

I was leery of paying for a dating site, but I am so glad that I did!! He messaged me first and wanted to meet after only a few chats and text messages. He was very upfront that he wanted a long term relationship and as soon as I touched his hand for the first time I knew we were destined to meet! Thanks you Zoosk for helping us find each other!!

I have had to kiss a lot of frogs to find my prince, Joseph truly has restored my faith that there is someone for everyone out there. Be patient my friends and you will find love soon as well!!

Zoosk is an overall easy site to use. The only thing I would like changed would be viewing people that have viewed me. Whenever I tried to view a person and then go back, it went back to the beginning of the line. It would be nice to have old profiles removed, it just adds clutter when searching.

Other than that, I found the site nice. I found someone to be with, so that is what it is all about, Thank you

I hated the carousel. The pictures of men coming round and round were horrible. Blurry, undesirable, ill considered.

As for the rest of Zoosk, matches were generally inaccurate. I was not being shown men in the right age group and lived so far away.

April 4, 2015
There is nothing real about this site, other than they steal your money for fake women. People keep viewing me and I write messages to them and they never respond. Totally a scam and we should start a class action law suite against them for theft and fraud.

It cost $29.95 to join this site, but when one is purchasing the membership, this site hits you with

an activation fee of $24.95. If you go through paypal, then you don't have to pay for the activation

fee. The search feature has been crippled lately and the grid view is no longer available. That

means that one has to click next on every member from the search results. The carousel feature is a

joke. When a member wants to meet you and you agree, then to be able to contact this person, you

have to purchase coins and they are rather expensive. Some profiles on this site are fake, when

contacting them via the wink, an email is sent back to you from the fake profile stating"thanks for

the wink, why not send me a real email telling me more about you". I have complained to customer

service about the limited search feature and they have done nothing about it.

WHY AM LEAVING ZOOSK

March 10, 2015
It's because I think even meeting new people and getting to know the people made me change my life

DO NOT DO THIS SITE TERRIBLE I GOT SCAMMED

I HAVE BEEN GOING THROUGH IDENTITY THEFT THROUGH TALKING TO SOMEONE ON THIS SITE.

HAS BEEN A HEADACHE FOR DAYS NOW.

I WENT BACK TO THE SITE TO SEE IF IT WAS CANCELLED AND MY PROFILE REMOVED, IT WAS AT FIRST CANCELLED, WHEN I RETURNED THE PROFILE WAS STILL UP AND ACCIDENTALLY HIT THE RENEW, CALLED IMMEDIATELY TO EXPLAIN I WANTED MY PROFILE REMOVED, AND CANCELLED AGAIN, AND STILL GOING THROUGH HEADACHE FROM THIS SITE....DIRTBAGS ON HERE. ONE MAN WANTED TO BRING HIS DAUGHTER OF 21 ON A DATE, FOR FOOT FETISH ETC.