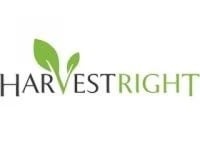 Customer Service is the most important.

August 29, 2022
Delivery was a breeze and the FD was packed very well. I had sent questions to customer service and they got back the very next day. I have completed a few batches and just love this FD. I highly recommend buying one.

August 29, 2022
I grew a garden this year and was looking for a way to store my harvest...... bought a Harvest Right freeze dryer and happy I did...... my two freezers are full of veggies and waiting for their turn in the freeze dryer.....

August 29, 2022
I had some missing parts. I was missing the hose that went from my freeze dryer to my oil pump as well as the power cord to the freeze dryer. Customer Service shipped out my hose very quickly but I haven't gotten my power cord yet since I didn't realize I was missing it at first. With that said, I love my Harvest Right Freeze Dryer. It is very well made and very solid. I can't wait to get my power cord and start my adventure.

Freeze Dryers are great for preppers

We have had our Harvest Right Freeze Dryer for 4 months now and I can truly say it is awesome!!

We have never had 1 single problem with it and its not noisy at all. The customer Service staff at harvest Right are great!

Be prepared for future costs on repairs and replacements

August 29, 2022
We have loved our harvest Right freeze dryer. We had to buy a longer vacuum hose to make it fit where we wanted to put it, but the hose was available. After 2 years we had to replace the front door because it started to crack from vacuuming. Overall, we would recommend it to anyone because it's been a really awesome money saver. It is also fun drying strange things like bread and butter pickles. :)

My small Harvest Right Freeze Dryer has processed approximately 12 batches flawlessly. I am very happy with the results and the ease of use.

My only issue that I have is once you have defrosted the machine and everything has drained out there is still a small amount of water in the drain hose that is located internal to the unit. It cannot be reached by hand. There is a belly in the hose that is lower than the hole that the hose goes out to the drain valve. This is clearly due to the hose being slightly too long. If this hose could be slightly shortened during the manufacturing process this would easily eliminate this problem.

It takes a little extra time and monkey business to completely remove all of the water in the hose since this observation has been discovered.

August 29, 2022
Harvest Right has been wonderful to work with. I see that they were having some quality issues with the product but since purchasing my medium freeze dryer all I have wished is that I would have gotten the large one instead. I have had to deal with the dreaded vacuum issue but they accessed it quickly over the phone. I do not mind working on it myself, its actually nice being able to work on something myself this expensive especially once it is out of warranty I can do the work myself.

Don't stay on the fence!

August 29, 2022
Don't stay on the fence; buy one! We've been freeze drying for a few months now and it still blows our mind every time we complete a batch! After setting it up, everything is super simple and user friendly. The best part was camping this summer for over a week and eating eggs, ham, yogurt, beef stew, etc. every day. It felt like we were cheating because the food didn't taste like traditional camp food. Best purchase we've ever made!

August 29, 2022
I love the convenience and peace of mind having food reserves for my family. A priceless piece of insurance.

August 29, 2022
I have a medium HR FD for about 3 months now - I love it and use it every day. The instructions are not very clear but I called customer service before running my first batch to be sure I was doing things right. They were awesome. The phone was answered right away. The only thing I don't like is that you have to download software updates onto a thumb drive. I wish you could do software updates automatically using wi-fi.

Great product and easy to use

August 29, 2022
I’ve had my Harvest Right for a few months now. It has been great. Easy to set up and use. I had one problem trying to freeze dry garlic. It would appear to be dried and then it would clump together. I contacted support and after a software update, it worked flawlessly. Ron was very helpful through the whole process!

August 28, 2022
Love my Feeze dryer. Customer Service has been very responsive any time I I had questions.

August 28, 2022
Just starting off with my Harvest Right medium freeze dryer. Ms Mary C. from customer service has been very friendly, helpful, and quick to answer any questions I've had.

Somethings to take note of:

As of this review, I've only had my freeze dryer for 6 days. Even though it only has 2 actual days of use, it's working exactly as it should. Instead of the Freeze Dryer, my review is about the customer service.

I will also be posting this exact review on several other sites via (copy + paste). That being said now onto the review.

I'm not sure who does the customer service training, or how they screen their reps, a lot of companies in the United States should be using whatever Harvest Right uses.

While it is true that harvest right CSR's have the usual read from a script, and copy and pasted email replies. There are just things that the CSR's at Harvest Right do, that have to be built into the individual and no amount of training will be able to produce in that person. There is also aspects from a business stand point that the CSR's do as well.

I called this company a lot in the first 4 days, this was due to the dependencies in the owners manual. I had so many questions it was ridiculous. But every time I called my issues were always dealt with by the time the call was ended. Here is what :

1. Whenever I called, my call was taken in an acceptable time.

2. Any time I started talking the CSR would instantly go silent and let me finish, even if the CSR was in mid sentence.

3. about 80% of the questions I asked, could only be answered by someone who actually knew the answer.

4. I was only put on hold one time while the CSR went to ask their manager but this was due to the question. Not only was I given an actual answer, it in an acceptable amount of time as well. I was not told the usual we have to look into this or this will be escalated.

5. The CSR's seemed genuinely interested in how to improve their customer service Case in point, I pointed out several things wrong and or inconsistent in the manual which they took note and said they'd pass it onto the team that does the manual.

From a business point of view, I was being told about promotions for free items that from a business aspect clearly has zero benefit to the CSR. So for a CSR to actually mention something to me, that doesn't really benefit them, but they also understand it gives the company advertisement, and have the CSR actually understand that, speaks volumes.

In closing, I couldn't give Harvest Right a 5 star rating because of the out dated information and poorly worded grammar, in the Owners Manual, as well as two CSR's gave me incorrect information.

Other than that, the Customer service at Harvest Right is some of the best I've even ran into.

The only reason I gave it 4 stars, is because we are having a problem with our system vacuuming.

Customer support has been giving us tips to how to fix the problem, but I think we are going to have to get a tech out.

Once our system works properly, I will recommend Harvest Right.

Changing the game in preservation!

My Wife & I bought this machine last year, we use it everyday. its well built, easy to use, anyone can do it! We love the products it produces so much that we were able to start a home based business offering freeze dried food, snacks and candy! Customer Service is top notch, we're excited to buy another machine sometime this year! Thank you Harvest Right! It's honestly, something that will change the way you look at food preservation. This company changed the game! The only thing we regret is not buying a bigger model first..

Wish I had my Harvest Right several years ago

August 28, 2022
We’ve owned our Harvest Right for a year now. The money we’ve saved by freeze drying almost everything left over from meals is amazing. The cost of food is rising daily. We go to Sam’s and pick up about 6-8 rotisserie chickens, remove the skin and debone them. Wish we had our Harvest Right when chicken was 0.99 cents per lbs.

August 28, 2022
I had an issue trying to get my Harvest Right Freeze Dryer up and running. The technical support was amazing and helped me through it!

Great way to preserve surplus from your garden