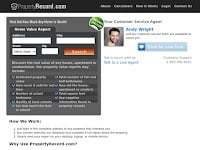 Easy to use. Helpful in planning future sales.

October 31, 2021
This site provided the most detailed estimate of my home's value from the 10+ sites that I have tried in order to estimate my homes value as I start to make plans to retire and consider what changes we will be making as we move to the next step in life

history of the house

not as good as older web pages

October 30, 2021
doesn't seem to have as much info as old website. but it does give me what I needed

Could not get home title info

Looking for the deed

October 28, 2021
This was easy to navigate and seems to have up to date information.

I was looking for much needed information on a property. PropertyRecord.com revealed everything I needed and the whole experience was rather quick and easy to read.

It's important to know the facts about any property you are considering.

Very informative and honest. Thank you.

October 20, 2021
A SCAM. I signed up for a one time report for $1 in January without knowing I actually signed up for the monthly $18.95 subscription. When I contacted them, they said they would cancel my subscription and issue a refund. After two promises over a few months to send a check, still have not received a check.

Do Not Use. They Are A Scam.

A SCAM. I signed up for a one time report for $1 in January without knowing I actually signed up for the monthly $18.95 subscription. The report was literally useless. It was the same info I got from any other website, like Zillow or the county auditor's website. I had no clue I was being charged for nine months because it was on a card I never use.

Come to find out, last month I had been charged $170.55. I reach out to the 27/7 customer service, and demanded a refund because I did not consent to a monthly subscription nor was I sent an email that I signed up for this service, as they purposely make it sneaky. They refunded me the initial 75.00.

However, they kept giving me excuses that there was a mistake or a glitch with the refunding department, so they were unable to send me the remaining $94. I reached out to them six more times demanding my money, each time it was literally the same response as the previous one with broken English.

I realized the company was fraudulent when they offered to send me a refund by check by mail (which is a big no no), and the "manager" responded to my email at 10pm PST on a Saturday.

Want a paid report of mortgage. paid in full July 2021

October 13, 2021
All I want is a report of the Mortgage being paid off, so far I have not seen that report. If I don't get that I will not be satisfied. Has cost me $1 so far for nothing.

October 12, 2021
There is no property map showing property lines like there used to be.

October 11, 2021
Total scam. They will charge you $19 when it says a dollar. You will only get Zillow info and nothing else. No permit info etc. report them. Bad Bad company

Unfortunately I saw your review after I paid them. Getting my money back.

Save your money and review Zillow for the same information

September 29, 2021
This site is an absolute joke. The description on the website lists a number of categories and details that are not included in the "report" It looks like someone just transcribes some information from Zillow and then charges for it. Don't be fooled by this site!!!
Cindy October 05, 2021