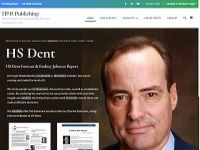 Harry Dent is a well known author and prominent market forecaster who, over the years has provided a long track record of hypotheses and predictions, some of which have been extremely accurate while others off the mark.

As the saying goes hindsight is always 20/20.

Born in 1950 in Berkeley, California Harry Dent maintained a stellar scholarly record throughout his life, graduating from USC at the top of his class.  He would then go on to complete his MBA from Harvard Business School as a Baker Scholar.

Throughout his career as an economic researcher Harry Dent developed his own system, The Dent Method, for analyzing market directions.

His approach focuses on interpreting consumer spending data collected throughout the maturation period of a family.  This takes into account the spending habits of a person from their youth to retirement factoring in life stages of having children, buying a house, etc.

Using this formula he was able to accurately predict the slowdown in the Japanese economy at the end of the eighties, and the Dow's growth in the early nineties.  He details his use of this method and a combination of other demographic statistics to reach his conclusions in many of his books.

Harry S. Dent's notable titles include "The Roaring 2000s," "The Next Great Bubble Boom," and most recently, "The Great Depression Ahead."

In his latest book Dent explains why we haven't seen the worst yet, and predicts a larger drop in stocks and real estate and even higher unemployment rates up till 2013.

The great thing about Harry Dent's books and method is that he gives you a macro view of the economy and really delves deep into demographics for his supporting evidence.

Thus, even if you don't agree with his predictions you can see the trends that he's using to formulate his argument.

Conversely, as with any other market forecaster his advice should be taken with a grain of salt.  Dent has had his share of missed calls, notably his 2000 prediction of the DOW reaching 40k.

Despite this there is a lot to be learned from his approach and his research into consumer spending habits.

If you have any experience with Harry Dent or his products, please leave your reviews below.

January 8, 2020
Asked a simple question from their online form several times and received no reply. Tried to cancel said "service" several times via email and webform and received no replies, couldn't hear me on the phone etc... They'll just keep trying to bill you nevertheless. You'll have to put a hold on your card regarding them. It's too bad people have to come across the scammers at Dent Research as they try to better finances. Also stay away from their crew of scammers as well ie… those "professionals" touting big returns. They'e just a gang of scammers.
SeelsSeels May 26, 2020

look up his book the roaring 2020 and you will only need to read a few pages before you throw it inthe garbage. the guy couldn't find water in the middle of the ocean.

Do not go anywhere near this company

October 1, 2019
I have tried many times to cancel this hopeless service. (4 times). Never receive any reply to my correspondence. And yet again they have taken another year's subscription from my credit card. Bank says the only way to stop them is to cancel my credit card. A total annoyance. Do not touch with a barge pole.

July 31, 2019
I several times cancelled my subscription but received only acknowledgement that my message was received. Now I discover they have deducted another year's subscription !!!!!. Stay away from them is my advice.

Advertising is not true and I do not appreciate their honesty

July 24, 2019
they send me an advertising article with research reports, they say only $ 49 for boom

December 15, 2017
Dent not only missed the equity Crash predictions he made th claim that there was nothing the central bankers could do to stop it and then said the central bankers delayed the inevitable. There is not difference, wrong date = wrong forecast especially when its years off. Either he was wrong about the crash or wrong about the assumptions that he developed to predict it. Further his primary scenario is always down and he assigns a reason so just in case it crashes then he doesnt miss the the date as a "cya" which hurts everyone following. Additionally, he constantly shows visual predictions with markets crashing (arrows pointing down) and then tells people not to to trade on non-formal predictions. Earth to Harry, don't show a chart with an effective predicition, simply say its a buuble and one day it will burst, because if people shouldnt follow it it serves NO purpose. The guy is arrogant and thinks he knows what he doesnt and he hurt lots of people. So you can like his newsletter but he failed massively on the bubble burst predictions and destroyed peoples returns. They could have gained, and not lost...double whammy for the easiest time EVER to make money. Thanks Harry! He has a lot to answer for and has still not apologized other than saying Mea Culpa..

Save your money and time....avoid

November 28, 2017
Couldn't even provide info promised on the first day! One "secret" after another for, of course, more money. Link sent was faulty. If you can't even construct a simple link for intro. materials then you don't deserve my hard earned cash. I put this in the scam category for sure. Couldn't cancel fast enough.

Melissa
March 11, 2015
I started receiving the free newsletter, Economy and Markets, back in early 2014. I loved it so much that I signed up to the paid newsletter subscription to Boom & Bust. Harry Dent and the Dent Research team really give crucial information on how to survive during these crazy economic times.

Allison S
March 11, 2015
Contrary to most of the reviews here, I have had great experience following Harry Dent's advise. He has always been 'bang on the money' when I have been looking to make crucial investment decisions, and I am a regular reader of his forecasts and predictions. Our economic future does not look prosperous, so I will take all the help I can get at this time.

I don't hear much now about his nonsense saying in the next six to nine months everything would collapse. That nonsense was being continuously promulgated five years ago. All these analysts survive on pure guess work-sometimes they are lucky but more often than not following their every word is a disaster for investors.

yes, when you shout for 50 years that it's going to collapse and then it finally collapses, you can say you were RIGHT for 50 years...

Paul B
March 3, 2014
Harry S. Dent is nothing more than a snake oil salesman. In the 1990's, he aligned himself with the Mutual Fund companies and made money selling books about the Dow hitting 30,000 in 2009. LOL! He couldn't have been more wrong! Then, when everyone realized he was a complete fraud, Dent reinvented himself as a perma-bear. I guess he figured that you're questioned less when you're a skeptic, as opposed to an optimist. So now he still makes his money selling books, except now there's a crash coming every quarter. Dent is despicable human being.

Mike
September 24, 2013
Now that people are bashing Harry it could be the ultimate contrarian, now it could happen. I read his stuff and wrote down dates when it was all going to happen, but the opposite happened Dow 15700 . The bears bashed this rally all the way up , the whole system was going to collapse and as a result I missed a huge opportunity in 2007 . The demographics could be all BS , with all the emigrants the US population will continue to grow. Lesson learned make your own decisions.

j
August 13, 2013
It looks to me Harry Dent is an idiot. The employment is growing slowly and stocks are moving higher against his predictions.
EdwardQuirk January 18, 2020

Has Harry ever actually made money on the stock market. What I have often wondered about harry

JerseyMike
July 11, 2013
Harry Dent is a complete charlatan. He preys on market fears or market hype depending on which emotion will sell more books. Look at the record, completely wrong by a mile most of the time. As they say, even a broken clock is right twice a day.

Harry Dent is a charlatan, who makes moneys by panicking and confusing naive investors, selling them useless stuff, mismanaging their assets, the people like Harry Dent belong in jail since they cannot be held accountable to the many they confused, and who were scared by Dent and bailed out of the market, while market keeps marching on regardless of Dent's ridiculous predictions.

harley
May 2, 2013
following dent and staying out of the market, because we are suppose to crash really hurt my investments

luke
December 6, 2010
H.S Dent told the guy on goldseek radio to sell all your metals by summer 2010 because they were going to crash. He stated that many times on earlier show too. Today Dec. 2010 gold is $1419.00 and silver is $29.23. If you followed this guy like me then you lost a lot of profit. He may know some good things about the market but as far as I go, I got screwed.

Dan
December 3, 2010
Pay no attention to Richard's review above. he is an idiot..note he reviewed Dent based on what he heard on CNBC (anyone who watches CNBC is a sheep). Richard is an example of how stupid people are and why these frauds are rich fooling them. You cant't rate someone by an interview, especially when it was obvious that when Dent said what he said it was well-known. Richard you fail in life. Now for Dent. Please research his record. he is completely clueless. This is a man who predicted Dow 30,000 and Nasdaq 10,000 by 2008. Then after the dotcom collapse he wrote another book predicting even higher for the Dow and Nasdaq by around 2010. Only after the current economic collapse did he come out with a book in 2010 discussing a depression after others...real experts already predicted the collapse in detail earlier, like Mike Stathis' America's Financial Apocalypse (2006).

VIEWED MR. DENT ON CNBC TODAY & SOME OF HE SAID ,I AGREE WITH HIS FORECAST FOR 2010. I FAIL TO SEE HOW WE CAN BUY OUR WAY OUT OF THIS MESS.

EMPLOYMENT WILL NOT PICK UP BECAUSE BEFORE A COMPANY WILL START HIRING THEY WILL WORK THEIR PEOPLE OVERTIME TO TAKE UP THE INCREASE IN BUSINESS. I CAN SEE WHERE WE WILL CONTINUE TO HAVE A LARGE UNEMPLOYMENT PROBLEM.

DENT IS WORKING FOR ME

July 22, 2017
I have found the products that I have purchased have returned in spades much better results than I was receiving with my Financial Advisor, who was charging a modest 1.35% per annum. Dents products are returning me with between 2-8 % per month on a regular basis and would be even higher except for a temporary glich that prevented me from purchasing Options which had phenominal returns.
Write a Review