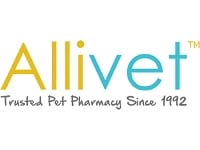 best service for the cost.

November 6, 2017
With Autoship option, they contact my vet, process my order, & ship fast, on time, & free! Tried two others to save a few bucks & they messed everything up. Can't get better service for less than Allivet.

November 6, 2017
Allivet is a fantastic pet pharmacy. I only have to initiate the purchase on their website and they contact my vet to obtain the prescription. I love the free shipping option and Allivet has great prices! The items are delivered promptly. I highly recommend Allivet for all pet prescription needs!

November 6, 2017
I have a large dog and feeding him and purchasing his meds can be extremely expensive. Alivet has allowed me an easy and effective way to buy all of my pet products under one umbrella. The prices are good, and the quality is the same as in high dollar pet stores and veterinary offices. I'm glad I found your service.

November 2, 2017
Allivet saved my Triton. He is able to get the drugs he needs for his CHF and I can finally afford them, plus I don't have to worry as they just show up at my door when his refill is due. I will always use Allivet as my go-to pharmacy!

September 28, 2017
Not going into detail and relive the experience...You will be sorry if you do business with Allivet. I completed everything they asked for including $22 for 2nd business day delivery. It has not left their building...I asked to cancel, she said they can not. Gave them an opportunity to do the right thing. They chose to be rude, disrespectful and condescending. BEWARE
GailDavid October 08, 2017

Absolutely true! I had the worst time of it trying to find a number, got transferred 3 times, couldnt understand the thick india accents, they asked for credit card number and phone and name SEVERAL times flat out lied about free shipping over certain amount! I had to immediatly call bank to deactivate my card as they rwfused to cancel order. HORRIBLE EXPERIENCE DONT USE THEM.

If I could give them a Zero I would. Placed order on September 18th and paid more for shipping (2nd day) as my dog has grand mal seizures. My vet okay'd the perscription and the order should have been to me by Sept 20th. It's now September 24th and I still do not have my pets meds. I called and emailed several times to ask for a refund on my shipping and an explanation as to what happened, I have had no response. Poor customer service and its almost as if they are a fake company. Had to place an emergency order through 1-800PetMeds. Their service was exceptional!!!

DO NOT ORDER THROUGH ALLIVET! BUYERS BEWARE!!

August 31, 2017
This is THE WORST company I have ever encountered. Won't send meds in a timely manner. Won't return phone calls or emails. Can't keep prescription information straight or orderly. Call wrong vets for Rx info. The list of incompetencies goes on forever. Customer service personnel have greatly improved recently, but management is TERRIBLE! Customer service reps try to help me resolve my continual problems w/ this crap company, but management won't even respond to them! A company that won't send meds to a sick pet? How dare they treat my family member this way! Take your business elsewhere.
GailDavid October 08, 2017

July 21, 2017
I placed my first order two weeks ago with Allivet and the order has still not been processed. I was supposed to get the medications for my puppy within 5-10 business days. I contacted them via email and their support service ticket system several times - still no answer from them. Today, I finally got a hold on them via Live Chat. After I explained my situation, I magically received an email from Allivet saying my vet was not providing the prescription... While on the chat, I called my vet clinic and they never heard from Allivet. When I asked about an update on my order I still did not get any answer from Allivet. I asked for the name and contact of the supervisor but they refused... As of now, I still don't know what is happening. Also no compensation or expedited shipping was offered by the rep after not handling this issue. I am extremely disappointed and unhappy about the lack of customer service at Allivet. They can not be trusted. Medications are essentials to the health of animals. This is a serious matter.

Worst service - cannot be trusted with your pet's health

March 29, 2017
Our experience with Allivet is beyond dismal - it actually puts my dog's health at risk. I have issues with ordering and timely delivery in the past with Allivet. I have reached out to their customer service numerous times - never to receive a response. This most recent experience is easily the worst, however. I placed an order for my dog's medication on March 15, 2017. My vet confirmed they responded, confirming the prescription on March 17th; they followed up on March 19th. The order was not shipped until March 24th - more than five days later. It is now March 29th and we still have not received my dog's medication; he has been without his medication for a week now. This is a serious issue. It is clear, given both the lack of response and lack of urgency in filling and shipping prescriptions, that Allivet does not care for its customers and their pets.

March 10, 2017
I am pleased with my purchasing experience so far with Allivet. Better price than most, and ships quickly, so my dog gets the meds he needs.

They are consistently cheaper than my local pet store.

Shipping is pretty quick too.

March 9, 2017
Prompts responses, great customer service. It all combines to provide worry free, stress free service for my 4 legged furperson and me.

March 8, 2017
I have been ordering from Allivet for several years now and have been very happy with them. The meducation comes in a timely manner and the cost is not too horrible. I will continue to use Allivet for as long as I need to.

Allivet is a scam!

Allivet cheated me and is still delaying answering my month of emails and calls, apparently in a pattern to make me give up and go away. They still owe me another $70 refund for two prescriptions that I returned. They refunded one but not the other, so I know they received both. I wrapped both boxes in their letter that allowed me to make the return. They had to unwrap both boxes to retrieve the one that they refunded. They have lied repeatedly about receiving only one box, allegedly trying to call me or email me (no record), then changing their story by saying they don't allow returns, that they allow only one return per person, that they didn't receive anything, that they have a steep restocking penalty, that they have to look for the box to see if anything else is in there... a month after they received it!!! They also keep changing the name of the supervisor, because I have talked to three different people claiming to be in charge. This is a scam outfit! I wish I had checked with the Better Business Bureau first! Allivet is a bunch of cheats. Read it all here: http://www.bbb.org/south-east-florida/business-reviews/animal-health-products/allivet-in-hialeah-fl-11011754 I am filing with the Florida State Attorney General Consumer Protection Division, and I'm looking for the owner's contact information so that I can get to the top. Allivet is NOT reputable. They might be low cost, but that goes with low integrity.

September 22, 2013
Very happy with the service and the prices are comparable and less than most.
Write a Review