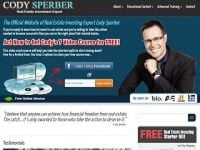 I see CODY had his trash bots writing the same BS over and over. I see he's stealing and deceiving people.

I am not stupid enough to just fork over my time and {let alone money} for LIES and NONSENSE. This guy and his program are a 100% SCAM!!! No, I did not pay a dime or spend more than three minutes to find the lies and scam. The ad says you get taught the basics FOR FREE. The second you click 'learn more,' you get to a screen that offers you a course for 89.00. Seconds to see the scam.

DO NOT BUY ANYTHING FROM THIS GUY. You promise this information and services for FREE, you best do what you offer. This is ripe for a lawsuit. People that make a lot of money in their area of focus should not offer ANY fake promises to funnel people. Simply sell a MASTERCLASS and be honest in your intentions. Period!

Looks like another Newby scam Guru. Cody contact me to resolve the issue if you have any decency.

Attention CODY or a supervisor! your jerk sale person Ryan have insulted me when I called to ask about your program. He refused to escalate the matter to you, and I am not going to put up with disrespect. Based on what I got from Ryan, Looks like you are running just another guru scam to screw the newbies by charging monthly fees, overpriced skip tracing, and providing no costumer support.

And then when poor newbies find some deals, you are just going to blast them to the list of potential buyers and hoping that it will lend somewhere. It seems like you have no intentions buying any properties, and newbies surely do not need you if you have no service, simply after their money and free energy, and have nasty people representing you.

May be your reps do not follow your model, but it makes you look bad. Please contact me to resolve the issues, otherwise I will continue writing reviews, and keep warning people about your crappy company who are after screwing newbies. I hope to hear from you soon if you have any decency.

Sir, Sincerely appreciate your article about Sperber! He and that idiot dog are always on You Tube. In a very real sense: why if he is so successful he would have no need for someone like me. Also, why do I need free software, when I can find house's in depressed Cleveland, second poorest city in America, on my own, and then he closes the deal and we split half the sale! If I have to get his software, and read the small print: your results are not going to be typical of Cody's, or his students! Why not? I could show him a house for sale right this instance, that I am writing this. Bottom line: all these successful people online, they don't need my help. Joey

How do you personally find houses easier than using the software?

Cody and his Team are Legit

December 11, 2018
Cody and his team go above and beyond for their students. The mentor program and the community they provide has given much success. I really do enjoy them because they are down to earth people that will take the extra step to help you. But with any program you buy into you have to take the necessary actions to be
AcalaDharmapala July 14, 2022

did you make any money yet, and how much did you spend on the program, skip tracing and all other expenses? It seems like cody is another newbie scam guru and does not buy any properties and simply will blast the deals to list of potential buyers hoping that someone will buy something. His jerk sales person ryan put bad taste in my mouth, and its clear that they after free energy and money newbies provide. i doubt that many made any money. If you want to make money in real estate. Have your own money. I can help you with funding, and you can find and do you own deals and dont have to deal with gurus who screw newbies. I have contacted costumer support and tried to get Cody attention, but no response yet.

The best place to learn about real estate!!

I started my adventure in real estate with the Clever Investor mentoring program in 2014 and couldn't be happier with the outcome.

Cody Sperber and his team have helped me, and continue to help me learn ways to use real estate to work my way to financial freedom and have more time with my family.

I have also participated in helping teach others how to do this at the Clever Labs and share my experience with how I did it and what it took to get where we are today.

This is not a get rich quick program unless you work as hard as you can in your business and make it happen for you, but they are there for you every step of the way to provide the best opportunity you can have at becoming the real estate investor you want to be.

It isn't always easy but if you want it they will help you and give you all the information and tools you need to get there.

There’s nothing like this out there. If there is, they are just copying Clever Investor!

My husband and I have been through their mentoring program and have been helping out with Clever Labs now for nearly 2 years. In the beginning, I just thought my husband had found another one of those mentors that just happen to catch his eye the right way, and we would just be gaining more books/training materials sitting on a shelf in the house gathering dust.

He had already spent a TON of $$$ on all those big name mentors, just to find out they weren’t really there for you (just your money) or had been out of the game for a while (so really didn’t know what was going on in the market today, or how to work it). Before we signed up, my husband scoured the web for negative feedback or looking for some sign of it being a scam.

Truly he couldn’t find anything besides a couple of small negative comments (mostly small complaints that seemed like they just didn’t really communicate the issues correctly or those staged negative comments, most likely from competitors). So he signed up, and honestly I just let him do the program at first, until I kept hearing him laugh while watching some of the videos, after watching a couple of them with him, I was hooked.

Clever is one of the few groups/programs out there that has a genuine family feel, where it doesn’t feel like competition, but where everyone can come together and make some money! Between the family atmosphere and simple ethics and morals they stand behind, that’s why we have been with Clever so long!

Cody and his team go above and beyond for their students. The mentor program and the community they provide has given much success. I really do enjoy them because they are down to earth people that will take the extra step to help you. But with any program you buy into you have to take the necessary actions to be

Cody and his team have exceeded our expectations. We have used the fast track system, Deal Automator and been a part of their hands on mentoring program. From start to finish Clever has been the real deal and a true pleasure to work with.

Cody and his teams have systems in place to provide a novice or expert with powerful tools to take your business to the next level. Plus their mentors and ongoing support team is second to none. They took us from being good real estate investors to doubling our business and making us great real estate investors. Our profit alone has paid for the cost multiple times over!!! Thank you Cody and team! ~ Michael W.

I wish to retract a negative comment I made earlier. After writing my original review about Cody Sperber I realized that I may have overreacted and said some things that went way overboard. I have had some bad experiences in the past with other coaching programs and I allowed my past to effect how I felt about Cody and his team.

After getting to know them I realize that they are actually pretty genuine people that really do care about their students and their success. I was trying to do wholesaling in the U.S., but from Europe where I live and this was much more difficult than I originally thought it would be. They did everything they said they would do and have some of the best training I have seen online.

At the end of the day I believe that Cody is very knowledgeable about real estate and that the Clever team works hard to teach their students to invest in real estate the right way.

Go away with your nonsense!

Here is the summary of their coarse,

you can find a lot more material in free websites such as bigger pocket. Go to your area meetings(be careful they are trying to sell you something too). Just go there to meet people.

I think these guys made their money in the real state crisis and now they are trying to use the reputation to ripoff people.

Go register for Phill Grove website and you can get a ton of free training.

After carefully reviewing our entire student database we found no record of ever doing business with a "Saleh" and it seems obvious that this is bad attempt at disparaging Cody's name by a competitor.

No worries, Cody. I'm not your customer (yet) but doing my homework. Frankly, this is rubbish. How can anyone trust a review by someone who cannot even spell course?

Exactly Tamara....so many typos in the Saleh review....what a knucklehead....no credibility in that review, no worries Cody. I'm an ASU grad as well...we are "edumacated" -LOL Looking forward to working with you.

Be careful. Don't do any training or business with them. You only lose your money and get a lot of empty promises. You won't see any deal. And don't believe what's written in the Rippoff report. It

seems they work together with Cody Sperber. It's everything else than high quality. Only your cash counts, nothing else! You'll regret it.

Hi Bridget, I am about to sign up with them, but now I am skeptical. Can you please tell me more about your experience?

Well let me tell you, I paid for their course, First they told me plan will be laid by Cody but he never talked to me directly. Then all the information they have are outdated and useless. Keep your money and use free services such as bigger pocket. Sign up for a few Guru site and get their free training but never pay a dime for their crap.

At the end, If you cant success on your own, they cant make a difference.