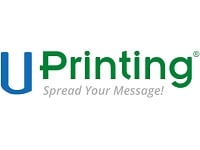 According to their webpage, UPrinting has been online providing high end and reliable printing services since 2000, processing thousands of on demand business printing and graphic printing orders on a daily basis.  UPrinting particularly prides themselves on offering discounting pricing to help small and medium sized businesses with their needs.

Like many online printing sources, UPrinting offers a wide variety of products, from flyers and business cards to menus, direct mailers, catalogs, and much more. They have pre-set templates or you can upload your own designs.

They offer free services, such as free sample kits of stocks offered for both their offset and large format printing, as well as their Free File Review. This Review service is a complimentary proofing service and requires no upfront payment. In addition, UPrinting offers direct mailing services once your printing order is completed.

But most importantly, UPrinting claims to be committed to social responsibility and eco-friendly printing initiatives which support environmental sustainability and various non-profit organizations.

When submitting your printing order, you have the option of choosing recycle paper, which decreases water, tree, and energy consumption, as well as choosing vegetable or soy based inks, which have lower amounts of volatile organic compounds than petroleum based inks.

In addition, UPrinting follows all the necessary processing guidelines of the Environmental Protection Agency for green printing, so they can ensure that you are getting the best quality, most socially responsible product.

If you have any experience with the UPrinting or their services, please leave your reviews below.

The worst handle of situation I have ever been part of

I bought the expensive delivery package of 3 days delivery, the order was placed on a Thursday afternoon, in the night I reviewed the project and moved forward.

Before the purchase, I enquired in the chat if it would be possible to get it by the following Tuesday, and they advised me to pay $56 to have it faster.

By Friday morning, I got an email saying the shipment date would be the following Friday. Then I talked to the company, and they told me the printing would happen only on Monday because of the late confirmation and trying to figure out a way to have it faster; AGAIN, the recommendation was to pay an extra $96 to get it by THURSDAY (two days later than the time of purchase).

To have a better solution I asked the company if I find a better and faster way to get my product I could cancel, only because the printing time would only start Monday as they informed me. So that was the "Arrangement"

That would be impossible to cancel because the order was already in the printing line.

They simply refuse to cancel my order and will deliver later than they previously agreed and I had to buy from another company that will provide it to me MONDAY.

the company overcharged to deliver fast

the company refuses to be clear in the conversation

STAY AWAY FROM THIS BUSINESS.

In response to a mess-up, horrible, terrible and badly done BANNER, the representative refuses to provide a fair solution such as a replacement.

There was NO REVIEW at all of the uploaded artwork by the UPRINTING printing department.

The final work I received is useless and a complete waste of money from my side.

It is unfortunate that I cannot rate them and their customer service as a 0 (zero) out of 5.

Don't Use Them For Christmas! Very Bad To Women

December 12, 2019
My wife was crying after they charged triple the cost quoted on shipping for CHRISTMAS!!!. Very bad company.

July 30, 2016
I have been ordering from Uprinting for years now. I can't beat the quality for the prices they offer. And when they estimate it to arrive in 10 days, it arrives in 7. I never have any complaints with quality, it's the best for the price. Yes, shipping is high, but that's because shipping is high and Uprinting is an honest company that does not inflate their prices to compensate for lower shipping costs. I've tried other online printing companies with prices as low as Uprinting in the past and none compare. I will continue to order from this company for years to come.

Rip Off On Shipping Fees

The quality of their work is fine, but they charge EXHORBITANT shipping fees. They will not allow you to use your shipper account number and then can rob you blind on shipping.

I have called customer service many times and they will not budge. A seven pound package from Van Nuys to Florida costs me $11.84 with my UPS account. Their shipping cost, after arguing for a half hour on the phone was reduced from $72.00 down to $66.00. Unfortunately, they have a product that I have 60 repeat orders for. I have not found a local printer that can do the work, but it is a top priority for us. But the second I do, I will never use Uprinting again.

Don't use it for any Christmas related printing. My wife was crying after speaking to their customer service. So many bad reviews.