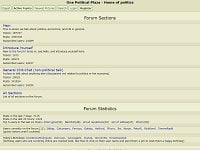 Want to know how much news is being ignored by the media? We find it!

October 12, 2021
One Political Plaza is a place to read and post news that's hard to find. Many of us have been there since the beginning and know each other and have interaction with each other outside the site. People need a thick skin and good humor to deal with each other and the OPP is a good place to learn it. The general chit chat section tends to make friends of political enemies and admin does not allow too much bad language and personal attacks in the political section...join and ask anyone.

If you are not a Trump supporter, you will be abused....

October 3, 2021
OPP is an extension of the Trump campaign. The few liberals who post that don't buy into the 'stolen election' narrative or that vaccines are an assault on personal 'freedom' are labelled trolls. There are some few right wingers with whom one can have a decent conversation but they are few and far between.
MichaelNettles October 12, 2021

I've been there since 2013 and have posted tens of thousands of posts. Trump wasn't a gleam in anyone's eye at that time..so no. It is not an extension of his campaign and since social media censors him and us we go where we can.

It is now dominated by leftists who do nothing but parrot CNN/MSNBC/etc. And the administrators let these leftists get away with pure profanity while the least little insult from a conservative and you get banished for a few days with a smart alec comment from the administrators. It is NOT a place for conservative ideas any more.

I now only want to discuss there because I have come to know many of the conservative poster's.

I agree 100%. Maybe I went right up to the line, on some occasions, but I've seen Leftys go way over and get nothing. I've been a avid contributor for 8 years. Have been on the street, "admin vacay", a total of 8 weeks when you add it up. They were pretty good staying neutral for 7 years, but now their bias is blatant, and obvious. Your adversaries can refer to you as the "scum of the earth" and the radical left member gets nothing. Oh well, another decent moderate blog down the drain. I'm leaving after 8 years. They are becoming more "woke" every day.

BigMike sort of agrees. I found out that inventing my own curse words helps. I've spent three days in the penalty box on two occasions. Lol!

If you're from the right, it's the place for you. I agree with Jon that it is operated by a Russian. The ratio of right to left is about 20 to one. The right usually gangs up on the one lefty. One has to remember you are to the left if you are not from the far right.

The lack of civility is severe.

Soon enough this site will be an all alt-right forum echo chamber.

The right wing controls OPP I have been on OPP for over 6 years now and have watched how there Admin caters to the right wing extremists. These people are not republicans there on OPP to do one thing. Justify Trumps daily clown show of lies, they are not interested in facts, there not interested in a common sense debate, there interested in one thing and that's spreading the far right conspiracy theories and last election they were thrilled when they picked up on Russian propaganda. I don't know if admin has planted these people or not but they can insult and denigrate anybody that even attempts to post facts and allowed to get away with any insult they want.

Admin on many occasions have suspended me for insults but would not even take into consideration what precipitated the insult. All I was doing is responding to an insult with a insult. As soon as you insult back they turn you into admin. And admin suspends you and most common sense bloggers just say the hell with it and don't come back.

I love it because I enjoy posting facts and it's fun to see these ignorant people and there foolish childish responses and then the insults.

It's actually fun so come and try it and you will see what I mean it's like dealing with children and it's fun and entertaining but post facts and watch the insults.

I have been called a communist, a fascist, a socialist, all different forms of government now how can you be all of that.

Sure I know you too.

TD! As I live and breathe. No matter what name you use your writing style is a dead giveaway. Lol!

June 19, 2019
I've been going on opp since before the 2016 election I'm not a political person but the people there have been kind enough to explain things give me sites for information and taught me to not be afraid to go looking for information.I enjoy the site it does get a little heated at time but what doesnt in this life have never seen anyone threatened. Did see some one tell another he knew where he lived and he was pulled from the site. Some have had something they posted pulled off.Other than that its fun
MichaelNettles October 12, 2021

Been there since 2013 and never once have I complained to Admin about anything anyone said and EVERYTHING has been said to me since then. I don't believe cuss words are a big deal and insults are a compliment coming from some. I've been in the penalty box only twice and I say pretty much what I want. They've deleted a few posts for cuss words and insults but they've never deleted a news story I posted or an opinion I have. I can work with that.

August 12, 2014
It's an open forum allowing any and all opinions to be publicly exposed to thought and rebuttal in full exercise of the First amendment of the Constitution permitting free speech. FOR SOME INEXPLICABLE REASON I CAN'T RECONNECT WITH THE WEBSITE..CAN ANYBODY HELP ME? [email protected]
View all 2 Comments
Tom Del August 06, 2018

OPP admin when you set guidelines and say you promise this forum is for individuals can voice opinions and then and then back it up with facts.

On OPP facts don’t matter with 90% of the individuals that post all they do is critize with no facts, spread hate and right wing garbage with absolutely no backup just insults and the only time admin gets invovled is when foul language is used and it only depends on who is using it.

I have hate threats against myself my family and OPP does nothing about it. They just let it go. OPP is a right wing leaning site and right wing bloggers are allowed to insult with no suspensions.

But I will not leave OPP because I will be dammed if I am going to allow the right wing ignorance to post garbage with no back up no facts.

Perceptions is not reality at times I post my perceptions but due to a lack of respect for bloggers on OPP I get slammed with insults and when I insult back OPP suspends me.

TDearnest! BigMike here! you sound the same on this review as you do on the OPP.

Interesting site for an education in fringe right wing extremism (and rudeness and filthy language both right and left). The Patty persona postings March 4 to present (preceded by Pana, then Capitalist personas in February with same subjects and story lines, same Russian internet propaganda site quotations, same response patterns, and unique 4 a.m. to 4 p.m. time schedules) are an education in present day fascist Russian viewpoint and propaganda intentions comparable to the old international communist Russian twisting and misrepresentation of issues to promote disillusion with America and radical action to disrupt American political and geopolitical decision....except the old prop op was aimed at twisting liberal thinking and the new op is aimed at twisting conservative thinking.

Thus, OPP is a most interesting political internet site. One caution about participating in OPP discussion--many exchanges are characterized by personal attack, rudeness, and even filthy language. My personal experience with the Russian propaganda operation included a posting August 2, 2014, of my wife's name, our street address, supposed church & pastor name, supposed botanical club, with threat to contact them with damaging info if I did not stop targeting the Patty posts. I learned the same day that another poster had had outside-the-forum actiion against his business from the Patty persona after a disagreement in discussion. I was suspended Aug. 3 from OPP "to protect you from harm." However, as of today, August 5, the threatening Patty is still posting the usual 5 or 6 topics per day (hasn't missed a day 150 days straight--836 topics, 9,300+ postings). So think twice before you post disagreeing with the Patty persona on OPP and be careful not to give personal info that might identify you and enable info search or computer hack.

why has my internet connection to www.OnePoliticalPlaza.com been severed? Am I the only one or has the website been terminated? [email protected]

I've seen a lot of people come and go on the OPP for being too rude and threatening. I've been there since 2013. That's what happens on an open forum.

April 22, 2014
As for the forum itself, the moderators keep an excellent eye on it by preventing spam and trolling. Although many posts consist of typical conservative/liberal bickering there are several informative items presented with (mostly) intelligent discussion. If you're expecting a high-minded philosophical debate in the classical style, this is NOT the place for you. But if you want to share opinions with fellow Americans who have a passionate interest in the affairs of the United States and are not afraid to speak their minds, you will not be disappointed.
View all 2 Comments
Tasine April 19, 2016

I totally agree with your assessment. Most of the members get passionate - and in my view, if they are not passionate, their agenda is not politics, but something else.

Indeed. If one is easily offended or looking to be coddled or wanting to engage in suave political sophistry this isn't the place.