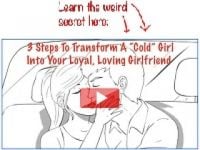 The Girlfriend Activation System is a dating product from Christian Hudson, who claims that he can help anyone crack the secret code in a woman's DNA that will help her fall in love with you.

According to Hudson, at a certain point in his life he became tired of not being able to date the type of high quality woman he was really interested in.

His dating experiences were so bad, he states, that he quit his high paying job, moved to New York, and went into debt trying to learn the secrets of a well known pick up artist.

So he went off on his own and began his own study of what women want and how to turn this into a set of dating skills.

He found the best place to learn this - from something called "literotica." The best popular example of literotica is the popular series "50 Shades of Grey."

This study exposed that the secret to making a woman fall in love with you is the "Obsession Story." He says that women are hardwired to want this story, and if you give it to them, there is nothing they can do to resist you.

The video presentation at their website says that his system gives people the ability to make girls into his girlfriend "at will," and the best part is, that this system will actually do all the work for you.

The system includes using a social application to get girls to come to you, as well as the secret to whether or not a girl will sleep with you on the first date, and a guide to "sexual texting."

Currently the cost of this product is $67, which Hudson claims is a discount off the estimated value of the system, which is over $3000.

If you have any experience with the Girlfriend Activation System, please leave your reviews below.

Danger - it's a total scam!

It's a total scam! Avoid at all costs!

They entice you with a one time low fee . Subscription included but can "cancel at any time". the truth is no - It's not possible to cancel!

1st they bury the instructions on how to cancel - almost impossible to find.

2nd when you follow the instructions, nothing happens - they try to bill you anyway.

3rd when I tried to call, nobody picks up the phone.

4th when I asked my credit card company to block this merchant, they informed me this merchant is not blockable!

5th my credit card company also told me that getting a new card won't help. Scammers like this can get around that.

I hope you avoid this #

MC
September 29, 2014
So fake!! A sorry (get rich quick scam for anyone dumb enough to fall for it!!) type of scam!! So sick!! I just feel sorry for anybody that calls for this type of crap!!
Write a Review