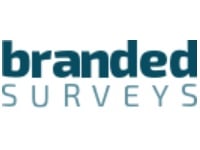 Branded Surveys is a market research company that states they have created a straightforward and easy to use portal for paid online surveys.

The company uses their database of participants to let large companies receive tailored market feedback on their products.

When online surveys work well they are a win-win for everyone involved:

How Does Branded Surveys Work?

The process is fairly straightforward.  You simply sign up with the company, accurately create your profile, then see if you qualify for current surveys.

If you successfully get selected for and complete a survey, you'll be rewarded with Branded points.  These points can then be redeemed for a cash payouts or gift cards.

You can get paid via PayPal or into a Branded Pay account.  Branded Surveys states that once your points are approved, payments will be processed within 1-2 business days.

Outside of participating in surveys you can also make money by referring your friends or family to join.

How Many Surveys Can You Take?

Unfortunately, the amount of surveys that you qualify for is out of your hands.  If you understand how these panels work then you won’t get as frustrated with the entire online survey experience.

Market research companies put out a call for, oftentimes, very specific criteria.  For instance, they may be looking for women between 30-40 years old who have used a certain product more than five times in the last month.

Next, a company like Branded Surveys goes through their database and sends a pre-screener to their users who fit the basics of that criteria.  If you make it past the screener, only then will you be invited to participate in the actual survey panel.

This is often the biggest source of frustration with online survey participants, as many feel they’re just wasting their time when they don’t qualify after several attempts.

It's free to signup for Branded Surveys.

If you have any issues you reach a representative through their website at Surveys.GoBranded.com/page/contact .

You can also check their FAQ page for more information.

For the most part Branded Surveys has positive user reviews, with many users reporting having a good experience and receiving their promised payouts.

Amongst the complaints there are many instances of common issues with survey sites in general.  Users have complained that they would get disqualified from a survey after spending a considerable amount of time answering questions, for example.

Some complaints go on to accuse the company of trying to get free responses out of its users.  It's important to keep in mind though that in any legitimate market research study it is possible to screen out late into the process.

Other users complained that while it took them a relatively short amount of time to get close to the payout mark it took them much longer to get the last bit of points necessary to cash out.

On the technical side there were some complaints about surveys being glitchy and crashing in the middle of a survey, leaving users with no way to get compensated for their efforts.

Finally, there were some negative reviews from users whose accounts were banned before they could cash out.  It’s hard to comment on those instances without knowing the particulars.

In general survey companies are sensitive to anyone trying to game their systems for easy payouts, so there are a number of red flags that can get your account unintentionally suspended.

At the time of this reviews the parent company of Branded Surveys has a B rating with the BBB.

Market research is a big business and there are many online survey companies available to choose from.

One of the safest, yet more time consuming options, is to find a local market research company.  These would require to actually attend a live group panel but, in general, they pay more than online survey sites.

Other alternatives include signing up with sites to test products or to troubleshoot software/websites.  Some of these include: TestingTime, Respondent.io, and PPOC.club.

We believe that if you understand the potential pitfalls of doing online surveys, and are prepared to deal with some inevitable setbacks, then you may have a positive experience with Branded Surveys.

It's good to have appropriate expectations, and treat online surveys as simply something to do in your spare time for a small bit of potential rewards.

The best you can do is be honest and accurate in your profile and document your account activity if you’re concerned about not getting upcoming payouts.

You also need to pay attention when taking the surveys as there are usually questions thrown in to check the consistency of your answers.  Inconsistent responses can be a potential reason why your account gets flagged or suspended.

For the most part this company has positive user reviews and claims to have paid out close to 23 million dollars since beginning operation. Their customer service reps also reply to online complaints which is always a good sign.

If you have any experience with Branded Surveys or their services, please leave your reviews below.