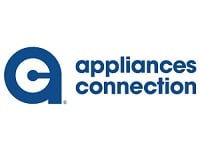 My husband and I bought a dishwasher from Appliance Connection, the reviews were great after all....

It took the full two weeks delivery, which is fine. When the contract company got there to install the appliance (which we paid them to do) they said they could NOT because the dishwasher was "behind the counter." They were talking about a kick plate that my husband easily removed when WE installed it this weekend (he offered to remove for them but they said no). The install guys stated we would get refunded our instation/haul away fee and for the install equipment, but haven't seen that refund of over $100 yet.... it's been well over 6wks. They dropped the washer and left ASAP.

Also upon looking at the dishwasher, the top rack slider was unhooked causing the rack to not work correctly and scratch the inside of the tub when we pulled the rack out to inspect it. Secondly, the washer had a mildew smell when we opened it up, it did not appear to be used (food/dirty water) but there was water in the tub and hosing. We called to return the washer bc we were very upset with the damage, the smell, and the lack of install service and were told of Appliance Connection's awful return policy (at least the representative on the phone was nice). She said she would pass on our issue with the return department.... Per their email from their return dept, you have to PAY part of the item's weight to ship it back EVEN THOUGH THE PRODUCT IS DAMAGED UPON DELIVERY.

So this weekend we finally had time (hence why we wanted the install by the company) and since we can't get a refund, we installed it (after getting the hose and cord since the install company didn't leave those with us). We turned it on a test cycle and noticed water coming out of the bottom right corner. We tried leveling the washer, maybe it was tipped forward and water was spilling out of the bottom pan. Still leaking (two towels to get the water up). We looked from the inside and saw the tub itself was cracked on the right side at the base of the tub. Now we're stuck with a dishwasher that washes (as far as we know) but has a cracked tub that if we do use will damage our cabinets. We're attempting to contact Appliance Connection AGAIN to at least get refunded the install fee, we have little hope for that, let alone helping us with any other issues.

So please, learn from our mistake, DO NOT use this company. I'm not sure who received good service from AC but we were not one of them. If they do not refund us at all, we are out over $600, and will just have to purchase (another $700) from Lowes like we should have in the first place. We were trying to be frugal and make money stretch further but we may end up paying twice to get a new dishwasher.

Please do not walk, but run from this company. This review will be cross posted to as many place as possible to save others from this "company" that claims it's loyalty to customers and commitment to service.

My order was placed in early-February, the agreed upon delivery date was late-May. 2 days before the delivery date I received an email stating the item wouldn't ship until mid-September. Meanwhile, the website shows earliest availability for the same item in July. What's going on here?

I spoke to an obnoxious customer service rep named "Rickeisha" who was hostile and combative. Her solution was "too bad, if you don't like it then you can cancel your order, I do not care." This was followed by a hang-up.

This company is a fly-by-night third world cesspool operation of ineptitude and stupidity. Look somewhere else for your merchandise.

Wouldn't recommend buying from this company

April 21, 2021
Ordered furniture from them in Nov 2020 and lost it or stole it Told me they had it and them told me it was shipped. then told me they lost it again. So I asked for a refund in they told me 5-7 days and here it is 7 days and I haven't seen the refund yet. Was told another 5-7 days. > lied to me about money refund now. Stay away from them pretty sad when you cannot even keep up with what you sell.

This company offers great prices but has slow shipping and an onerous return policy. I purchased a loveseat that turned out to be uncomfortable. When I inquired about returning, I discovered that there would be a 30% restocking fee because the packaging was discarded (by the guys who delivered the unit) plus $1.50 per pound to return.

I wish I had read all this somewhere before I purchased this unit. Next time I will stick to Costco!!

What didn't go wrong with our order would be easier to answer than what did. I ordered 7 appliances in May for an estimated end of July/early August install. No one EVER phoned me from their delivery company to discuss the survey date and final install. I contact then in late July and was told they were still waiting on 2 appliances to be delivered. We weren't going to be moving in until August 15th, so I wasn't too concerned, other than the fact that NOBODY ever contacted me.

Again, no one contacted me so on August 9th, I called only to find out that they were supposed to deliver the items the next day! Clearly, we cancelled that and discussed having the survey done the following Tuesday, with install set for the next Thursday or Friday (8/20 or 21). Tuesday came and went without any communication. I contacted a manager named Eric from Appliances Connection and he assured me all would be fine now because he was going to handle our situation personally and ensure we'd be well taken care of. No survey was ever done and they arrived on Friday, 8/21 to install. They installed the dishwasher (incorrectly) and the washer.

So, now, we've been in our house for a week and we still have NO WAY TO COOK so I have to go out and buy a toaster oven and a microwave so that I can feed my family. Another week goes by and alas, the wall oven unit is delivered (at 7:30 at night mind you) but they refused to install it because they didn't think the electrical box would fit. They didn't even try it. They were wrong. We paid another company to come out and install it for us a few days later. Still... no cooktop. We ended up buying another cooktop from another vendor and had it delivered and installed in 2 days.

Then, we paid another guy to come out and install the vent hood. 23 days after moving in, I can finally cook in my kitchen, no thanks to Appliances Connection. But still, not a single bit of concern shown on the part of AC except by a customer service rep named Monika, who I wish would go work for a more reputable company because she was super helpful to us.

Our unhappiness with this company is impossible to gauge with a monetary figure, but we would have hoped SOME TYPE OF MANAGER would have reached out to us to express their apologies for the ridiculousness we have been forced to endure. We lived in our home for 22 days without a complete kitchen before we took action on our own to complete the job with another vendor.

It would be nice to have heard from someone in charge to hear that they understood our frustrations and wanted to find a way to make it right. So far Monika is the only one that has offered us any help or accommodation. Both Eric (the supposed Manager) and Elizabeth left us without any answers or suggestions for help.

We regret having chosen Appliances Connection for our full home remodel. Fortunately, we won't be making the same mistake again.

Ordered new higher end washer and dryer. Prices were decent, but not amazing. Items listed as in stock, but after ordering I could see that one item wasn't available. Took three weeks before everything finally shipped together. I paid for the option of an install of the new items and the haul away of old units. The install was average, and they did load up the old units, however they refused to take all the boxes and packing materials the new units came in. Ridiculous and annoying.

In the end, if you can be very patient, this place is ok for the price, but don't bother paying for the install

DO NOT USE THIS COMPANY

August 25, 2019
Appliances Connection essentially scammed us out of hundreds of dollars. We were charged but received no services or product. We ordered a washer

Everything about this company sucks

October 10, 2018
This company lies lies lies doesn't have a manager and took three months of waiting on an order that I finally cancelled customer service is rude and all they know how to do is lie do not buy from this company

The best price around.

I love that I can compare items on their website. The best description for appliances only at appliancesconnection.com!

And delivery went flawlessly! Will recommend.

You are one in a million

For sure. I highly question any positive reviews about this company. They probably pay someone to write them. They are the absolute worst.

March 2, 2017
Waited a month for furniture even though their website stated the furniture was " in stock and ready for delivery." Finally received a notification that my furniture will be delivered in the morning on 2/23. So the night before, I got rid of my old furniture to make room. The next morning received a call from AM Trucking (the delivery company) stating the driver is sick and my delivery will be rescheduled for the following week. WHAT?! A delivery company that only has 1 driver with no contingency plan? I took the day off of work to be there for the delivery. On top of that, I have family coming in from out of town with no furniture! I wanted to cancel the order and they said I would have to pay the shipping and restocking fee...again WHAT?! Their best offer was to take $50.00 off and give me the "white glove" delivery for free. So I have to rent furniture for the weekend, loosing a pays pay... nope, $50.00 won't cover that. One of the managers called me from a blocked ID number (nothing fishy about that, right?) and tried to get me to not cancel the order. I did however cancel the order because I was forced to do so and I did not want to do business with them any longer. They refunded $605.98 but however did not refund the shipping and restocking fees of $288.99. So I'm out that amount because of no fault of my own. This is NOT how you do business and to keep a customer. I ordered the same exact furniture from Gardner-White and they had it delivered and set up the next day! THAT is how you do business.
AmyKinzie October 10, 2018

I honestly think you must be an employee or an owner

Probably an owner. Even employees there think it's a scam company. Just check their GlassDoor reviews.